Thursday June 13 2019: Marcela Ferreyra (Argentina), The Andean Range and its Flowers in Patagonia

We are delighted to welcome to CRAGS, Marcela Ferreya, who is a Biology Sciences Professor who lives and does botanical research in Patagonia, Argentina.  Marcela will speak to us on “The Andean range and its flowers in Patagonia”.

Her ground-breaking research has led to the publication of “High Mountain Flowers of the Patagonian Andes” – English and Spanish-(2006) and “High Mountain Flowers in Patagonia” -Spanish- (2018).  Marcela collaborated on “The Laws of the High Mountains” -Spanish- (2010); published several papers and articles about this flora; worked for National Park Administration surveying Flora and Vegetation in National Parks in Patagonia. In addition, Marcela published “Flowers of the Patagonian Steppe” -English and  Spanish- (2012). Recently she published a book about the Valdivian Forest: “Flowers of Puerto 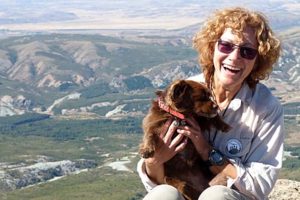 Blest -Valdivian Forest” -Spanish- (2018).  Currently Marcela is working on: “Flowers of the Forest in Patagonia” and “Flowers of the Austral Monte”, both in Spanish. All of these publications feature her excellent photography.

Between 2005 and 2009 Marcela worked in a nursery trying to understand the cultivation of High Andean and Steppe Flowers and produce some protocol of cultivation. She helped in the establishment of a little nursery in the steppe, in the rural community of Pilcaniyeu. She also headed a project to recover the vegetation in a high mountain trail in Los Glaciares National Park in Santa Cruz. Between 2010 and 2017 she lead a group of students that constructed a small Botanic Garden at the Educational Institute.

Marcela has worked as an educator at all levels between 1982 until her retirement in 2018. She continues to teach wherever she travels.