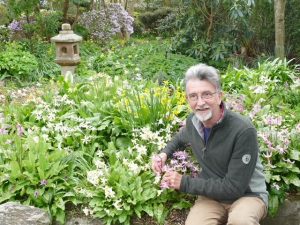 Ian Young in his garden

Ian Young, a distinguished gardener and author from Aberdeen, Scotland, will speak to CRAGS about plants in the Ericaceae family, which includes heathers, rhododendrons and many others.

Ian Young has had a lifelong interest in plants and along with his wife Margaret has developed a well-stocked garden in Aberdeen. Over more than forty years the trees and shrubs have matured and Ian has developed a rich under planting of bulbs and woodland plants which provides a progression of seasonal colour texture and form. Most of the plants, including bulbs, trees and shrubs, have been raised from seed.

Ian is also experienced in alpines and rock gardens having developed various innovative ways of making troughs including the method of turning polystyrene (Styrofoam) fish boxes into troughs that mimic the appearance of real stone. At the Scottish Rock Garden Club he has won many Gold Medals and Best in Show Awards at National Shows using these troughs and this method has been taken up widely, with demonstrations of the technique being given across the UK, in New Zealand, Canada and America by all sorts of different alpine groups.

For twenty years Ian has written a weekly online diary, the Bulb Log, where he shares his enthusiasm for plants and their garden in 2015 he also started a YouTube channel where there are over 180 videos from the garden.

He has published an electronic book ‘Erythroniums in Cultivation’ which is available for free download at SRGC.net

Ian has lectured widely in the UK, Europe, Scandinavia, New Zealand, USA and Canada including at many prestigious international conferences. For over 15 years he was a regular broadcaster on BBC Radio Scotland.

Ian is also an artist and photographer and uses both these skills in the garden and his presentations.

In 2007 he and Margaret were honoured to be (jointly) awarded the Queen Elizabeth, the Queen Mother Medal by the Royal Caledonian Horticultural Society for outstanding service to Scottish horticulture. In 2008 Ian was awarded the SRGC Golden Jubilee Salver for outstanding service to the SRGC. In 2020 Ian was awarded the Veitch Memorial Medal by the Royal Horticultural Society for ‘exceptional involvement in the advancement of the science art and practice of horticulture’.

This will be a Zoom-only meeting. Member will receive an email reminder with the links prior to the meeting.  Non-members may use Eventbrite to register for the talk.